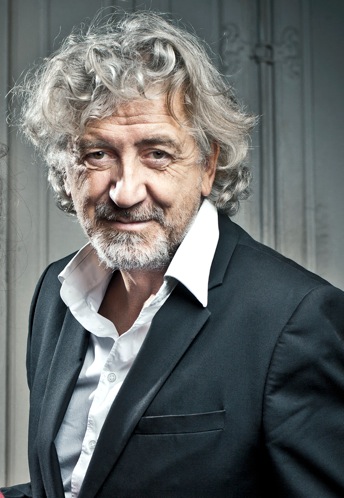 Laurent Monlaü began photography in 1977 with a report in London “Portraits Punks”. Numerous travels lead him to photograph in Mexico, the United States, as well as in North Africa. He became interested in the art of portraiture in the 80s, particularly in the field of theater and cinema, and he is responsible for the visual creation of various cultural magazines. Since the beginning of the 90s, he declines his style by the use of color, a baroque interpretation of reality. Member of the Rapho agency for 16 years, he has been represented since 2007 by Interlinks image. He regularly publishes in magazines in France and abroad.
His personal projects are widely published and exhibited (Festivals Visa pour l’Image, Chroniques Nomades, Terres d’Images among others). His series of portraits ” Maures ” (1st prize at the World Press 96) is the subject of his first book ” Maures ” (Editions Marval 1998). In 1998 he undertook a long crossing of Africa from Dakhla in Western Sahara to Dakhla in Egypt, “Le voyage en Afrique” (Marval 2002).
In 2002 in Brazil in the Bahia Bay of All Saints, he also realized a project “Eden” with a film and a series of images on the Brazilian northeast through the eyes of a woman. Then in 2003 he exhibited a series of diptychs at the Musée des Augustins in Toulouse in the spring of September, “A380”, a commissioned work on the construction of the Airbus plane. Since then he has begun a long documentary story about the backstage of Las Vegas, a portrait of America through the neon city presented at the Espace Dupon in January 2009.
Since then, Laurent Monlaü has been working on the forest around the world, the first part of which is exhibited at the International Biennial of Image in Luang Prabang, Laos under the aegis of Culture France and at the Fréderic Moisan Gallery, Paris. He is the co-founder of the collective VENDREDI, auteurs associés.
Laurent Monlaü is represented by Signatures, house of photographers.