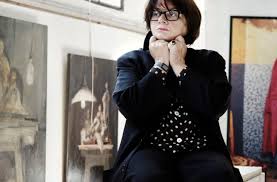 Françoise Huguier, born June 15, 1942 in Thorigny-sur-Marne, is a French photographer. She is particularly known for her work in Africa and for her fashion photography.
She is a member of Agence VU’.
Her fashion adventure begins with the fashion shows she photographs twice a year, “backstage” and in the workshops. Her photos appear from 1983 in the pages of the newspaper “Libération”. The art directors of major magazines such as Vogue, New York Times magazine, ID Women’s wear, Marie Claire, DS order her fashion series.
A great traveler, she is passionate about Africa, which she began to travel at the end of the 1980s. The continent inspired her first book: Sur les traces de l’Afrique fantôme (in the footsteps of Michel Leiris) published by Maeght in 1990. She is a laureate of the Villa Medici hors les murs for this work.
In 1991, she discovered the photographers Seydou Keïta and Malick Sidibé (future winner of the International Prize of Photography in 2003) and contributed to making their work known.
Once again winner of the Villa Médicis hors les murs in 1993 for her book En route pour Behring (éditions Maeght), a diary of a solitary journey to Siberia. This work is exhibited in numerous festivals and galleries and earned her an award at the World Press Photo that same year.
In 1994 she created the first Biennale of African Photography in Bamako.
In 1998, she exhibited A l’extrême, a work of several years in KwaZulu-Natal in South Africa, at the European House of Photography. In the continuity of this work on Africa, Secrètes, a book in which she succeeds in entering the intimacy of African women, is published by Actes Sud in 1999.
She also directs advertisements for Mugler, Lanvin, Lacroix…
Also published by the same publisher is a book entitled Sublimes, the fruit of his work on fashion in the 80s and 90s.
In 2001, she decided to spend several years in Saint Petersburg to work on community apartments. A book on this work entitled Kommounalki was published by Actes Sud in 2008. She obtained an advance on receipts from the National Center of Cinematography to shoot a film: huis clos dans un de ces appartements, entitled Kommounalka (2008 release by Les films d’Ici).
In 2004, she returned to the traces of her childhood as a prisoner of the Viet Minh in Cambodia. A book entitled J’avais huit ans retraces this story and was published by Actes Sud in 2005. It was followed by an exhibition at the Arles Photographic Encounters.
In 2007, Jean-Luc Monterosso, director of the Maison européenne de la photographie, asked him to be one of the curators of the Mois de la Photo 2008.
In 2008, she is the guest of Christian Lacroix, artistic director of the Rencontres internationales de la photographie d’Arles, where a major exhibition will be devoted to her.
In 2014, a major exhibition will be devoted to her at the European House of Photography, Pince moi je rêve.